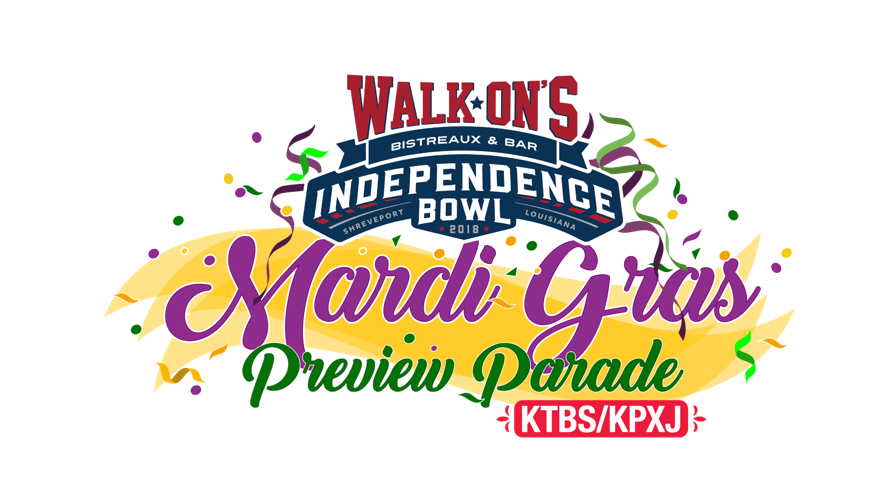 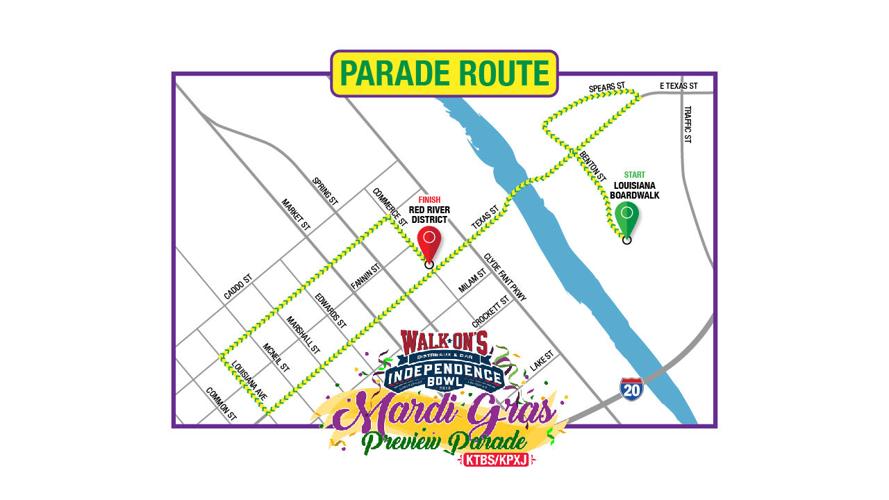 Live coverage of the Walk-On's Independence Bowl Mardi Gras Preview Parade begins on Dec. 26 at 6pm on KTBS 3 & ktbs.com. Our exclusive KTBS 3 Parade Tracker will be activated. You can find it at ktbs.com. Coverage is brought to you by Barksdale Federal Credit Union.

(SHREVEPORT, LA) - Visitors to Shreveport-Bossier City for the Walk-On's Independence Bowl will definitely get their money's worth.  They'll witness what promises to be an awesome football game between Duke and Temple, plus get a little taste of Mardi Gras.

The Mardi Gras Preview Parade and Pep Rally is set for 6pm on Dec. 26.  That's the day after Christmas and the day before the big game.

The parade will begin at the Louisiana Boardwalk Outlets in Bossier City and roll across the Texas Street Bridge and down Texas Street to Common Street, then loop through downtown Shreveport to end in the Red River District.

More than 20 floats and 14 krewes will be participating in the parade.  The parade will also feature the bands, cheerleaders and mascots from each team.

Famed Louisiana Chef John Folse who specializes in Cajun and Creole cuisine will serve as Grand Marshal. On game day, Chef Folse is teaming up with Walk-On’s Bistreaux & Bar to prepare to shatter the Guinness World Records title for the largest pot of gumbo, so you don't want to miss that.

RALLY ON THE RED

Rally on the Red festivities will kick off at 5:00 pm with the Pub Crawl. This year's edition of the Pub Crawl will highlight 12 unique bars and restaurants throughout downtown Shreveport. Check-in will be in the Red River District, where attendees will receive a credential and list of locations. Special prizes will be awarded to different participants throughout the Pub Crawl.

After the conclusion of the Mardi Gras Preview Parade, the festivities will conclude with a trio of events in the Red River District. Following the parade, the two school bands will conduct a pep rally and battle of the bands at approximately 7:30 pm. The Pep Rally and Battle of the Bands will be followed by the final event of the night, a free concert from the Baton Rouge-based country band Parish County Line. They were formed in 2012 when Derek Shipley of Centreville, MS met Travis Hood of Denham Springs, LA and decided they wanted to bring 90's Country Music back to South Louisiana. It wasn't but a few days later they formed Parish County Line.

Their first EP was released in the summer of 2017, and the group has since taken the Baton Rouge music scene by storm, including winning DIG Magazine's Greatest Local Band for the second year in a row.

The last few months the group has been focused on writing new songs and building an unforgettable on-stage performance. They are set to release their second EP in the late spring of 2019.

Now back to Chef Folse and his plans to shatter the Guinness World Records title for the largest pot of gumbo.

Folse plans to dish out more than 6,500 pounds of the Louisiana food staple to Fan Fest attendees during the Independence Bowl. A bowl of the possibly record-busting gumbo costs $5 with proceeds going directly to the Fisher House Foundation. The charity is an organization providing temporary lodging for families of patients receiving medical care at major military and VA medical centers.

Fan Fest kicks off at 9 a.m., and Folse will have gumbo hot and ready for guests.

ABOUT THE WALK-ON'S INDEPENDENCE BOWL

The Walk-On's Independence Bowl and Independence Bowl Foundation are prevalent in the Shreveport-Bossier City area throughout the year, hosting events to help enhance the economic impact and growth of our community. For more information, visit WalkOnsIndependenceBowl.com or follow the bowl on Facebook, Twitter and Instagram at @IndyBowl.