SHREVEPORT, La- Controversy rises at Captain Shreve High School after a student was dismissed from the cheerleading team. Her mom, Trice Calloway says it's because of her daughter’s hair.

Her daughter, Asia Simo, is black. She says her hair texture isn't as easy to style as her peers. Calloway says she feels like her daughter is being discriminated against.

In a Facebook post, Calloway said that Asia received 20 demerits. Fifteen of those, added cumulatively five each time, were because she wore the wrong hair. And according to the contract signed by all parents and students, 20 demerits gets you kicked off the team.

The contract also says members of the spirit groups must be in full uniform for each game. Calloway says she was informed that desired hairstyles are a part of the uniform.

However, for these particular incidents, Calloway says that her daughter wasn't given enough notice to quickly put her hair in the desired hairstyle. She says because of her daughter's hair texture, it takes a substantial amount of time and money to do what others can do with their hair in its original form.

She says she also had to pay $1,500 in school fees for tryouts, uniforms, and other expenses just so Asia can join the team.

Calloway took her concerns to social media saying she may take action if nothing is done. Calloway says it's unfair for her daughter to have to go through this.

Calloway says it wasn't because Asia was being defiant. In fact, she described her as an honor roll student who is kind-hearted, respectful, and avoids trouble.

“It’s disheartening to see that a child can go from elementary, kindergarten, all the way to up high school, as a senior in the 12th grade never have any type of referrals, any type of disciplinary actions, never been in trouble at all, dismissed for a reason, to me, as small and minute as this one,” Calloway said.

Asia says she enjoys cheering for the squad. She's has been a Gator cheerleader all four years.

She says she was heartbroken to be kicked off the team.

“I didn’t expect to get kicked off the cheer team for something so small as my hair,” Asia said. “It kind of broke my heart. I did start crying at one point, but my mom taught me to be strong. So, I just kept my head up and just moved along with it, but I was heartbroken that I was dismissed from the cheer team.”

Asia says because of this, she's no longer interested in cheering in college.

The Caddo Parish School Board released a response:

“While the district cannot speak to any single student or their situation, our district in the strongest terms does not tolerate discrimination as staff works each day to provide students numerous opportunities both inside and outside the classroom. Among those opportunities, students may participate in are spirit groups and extracurricular activities such as cheer. All such groups are governed by a constitution which is reviewed annually by a diverse team with feedback from students. Prior to trying out, students are given the opportunity to review the constitution and must sign to affirm they have read the constitution and will abide by its contents. These guidelines include behavior, dress, attendance, participation and a variety of other factors which all participating students are expected to uphold. In no such instance, is a single incident or factor cause for dismissal. Instead, students are provided every opportunity to learn from their experiences and to be a part of the team unless they show a consistent pattern of failing to comply with the approved guidelines.”

Here is a copy of the constitution all parents and student must sign. 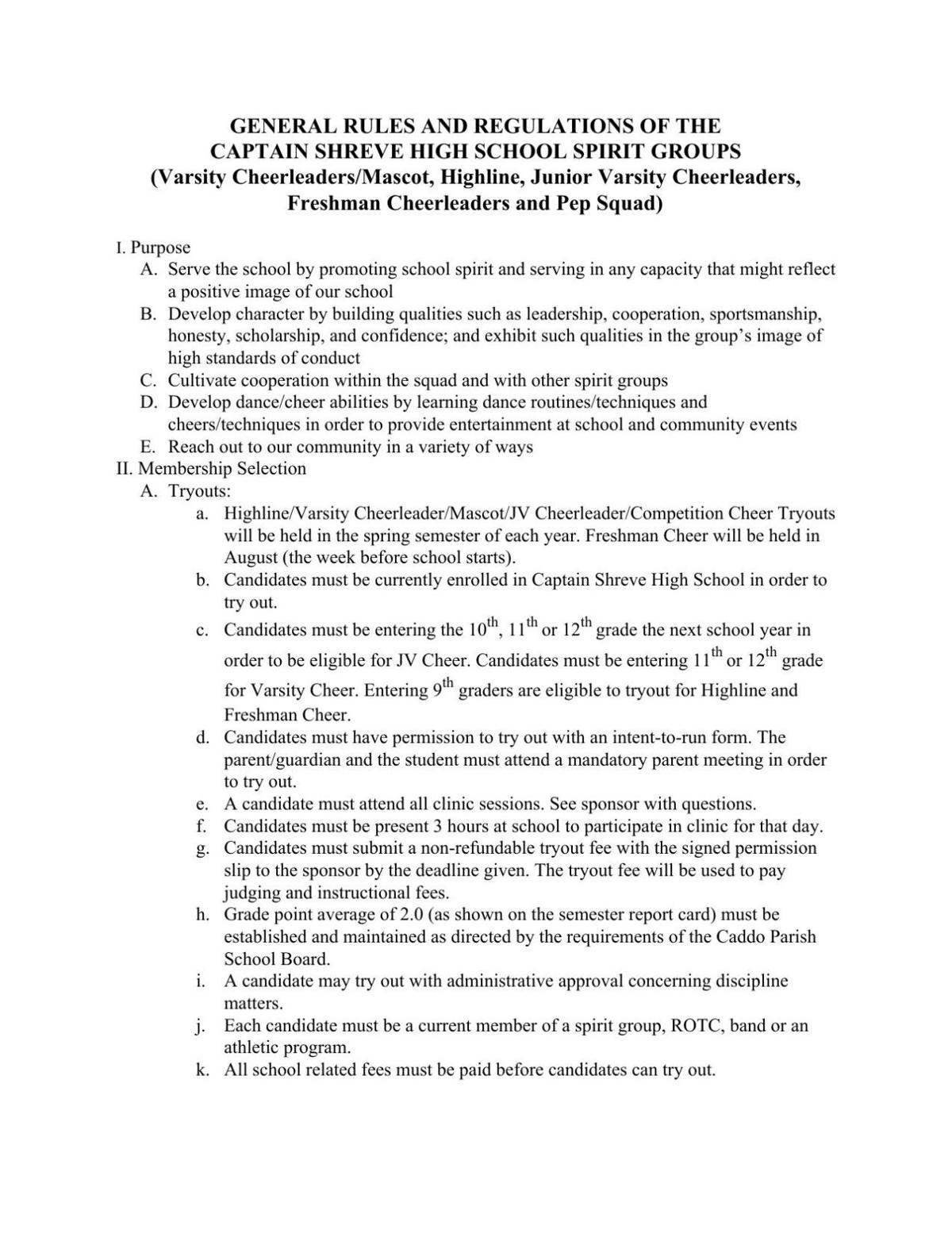