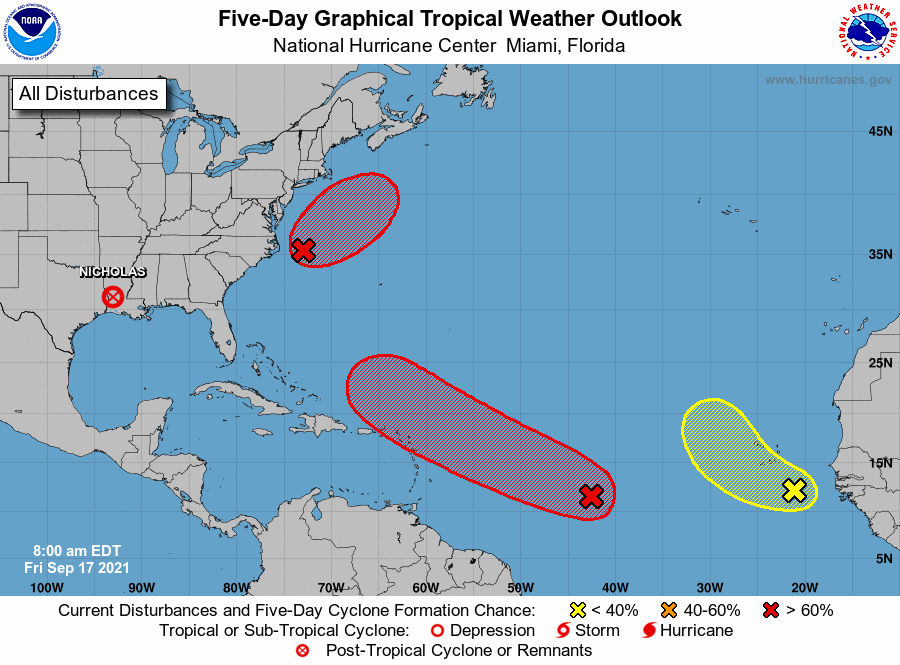 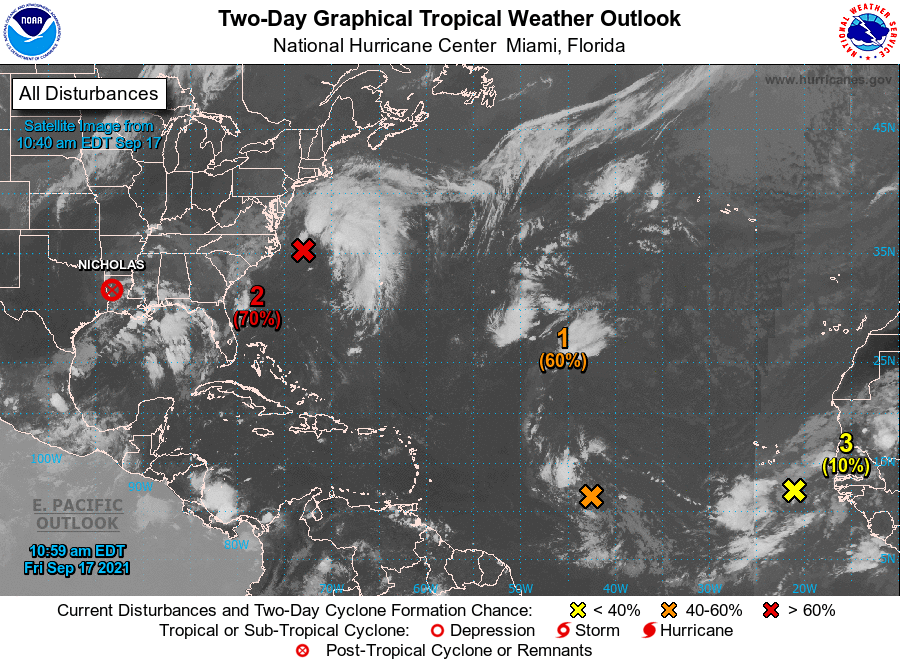 What's left of Tropical Depression Nicholas was drifting over Louisiana on Friday morning.

As of 10 a.m., the remnants were about 50 miles northwest of Alexandria and about 65 miles southeast of Shreveport.

The system has picked up a little speed and is now moving north at 7 mph, forecasters said. It's moving northwest into western Louisiana, and it's expected to continue this motion into Saturday.

It has winds of 15 mph and is expected to continue to degrade in the next 24 to 36 hours.

Two of the disturbances in the Atlantic are likely to develop into tropical depressions within five days. It's too soon to if they could be a threat to the Gulf of Mexico.

The next available storm name is Odette if any of the systems strengthen into a tropical storm.

So far this week, southeast Louisiana has had five to 10 inches of rain, according to the National Weather Service, with pockets getting up to 12 inches. Some places across the Gulf coast could end up with 14 inches by the end of the week.

A tropical depression is likely to form this weekend or early next week from a system in the Atlantic, hurricane forecasters said.

The system is between the Lesser Antilles and the Cabo Verde Islands and is moving northwest at 15 to 20 mph, forecasters said.

It has a 70% chance of developing into at least a tropical depression within five days.

A short-lived tropical depression or tropical storm is likely to form Friday or Saturday off the East Coast in the Atlantic, forecasters said.

As of Friday morning, the system was about 150 miles east of Cape Hatteras, North Carolina. It's moving northeast at 15 mph.

It has a 70% chance of developing into at least a tropical depression within five days.

Regardless of development, this system could bring high surf to portions of the southeast and mid-Atlantic U.S. coasts through the weekend, forecasters said.

Forecasters are tracking another disturbance in the far eastern Atlantic Ocean. It's a couple hundred miles southeast of the Cabo Verde Islands.

It's forecast to move northwest at 5 to 10 mph over the far eastern Atlantic.

Environmental conditions are forecast to be marginally conducive, and development, if any, of this system should be slow to occur over the next few days, forecasters said.

It has a 20% chance of developing into at least a tropical depression within five days.

The Atlantic hurricane season runs from June 1 through Nov. 30.