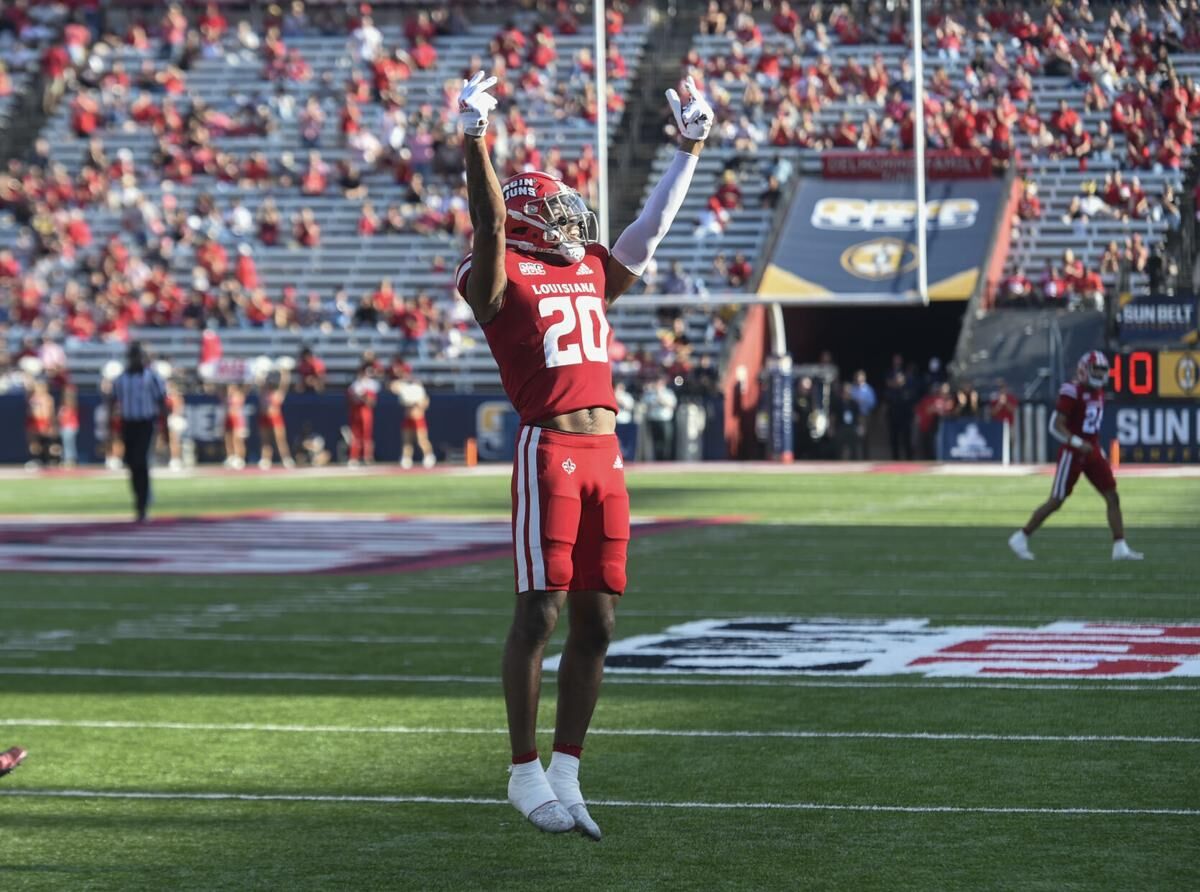 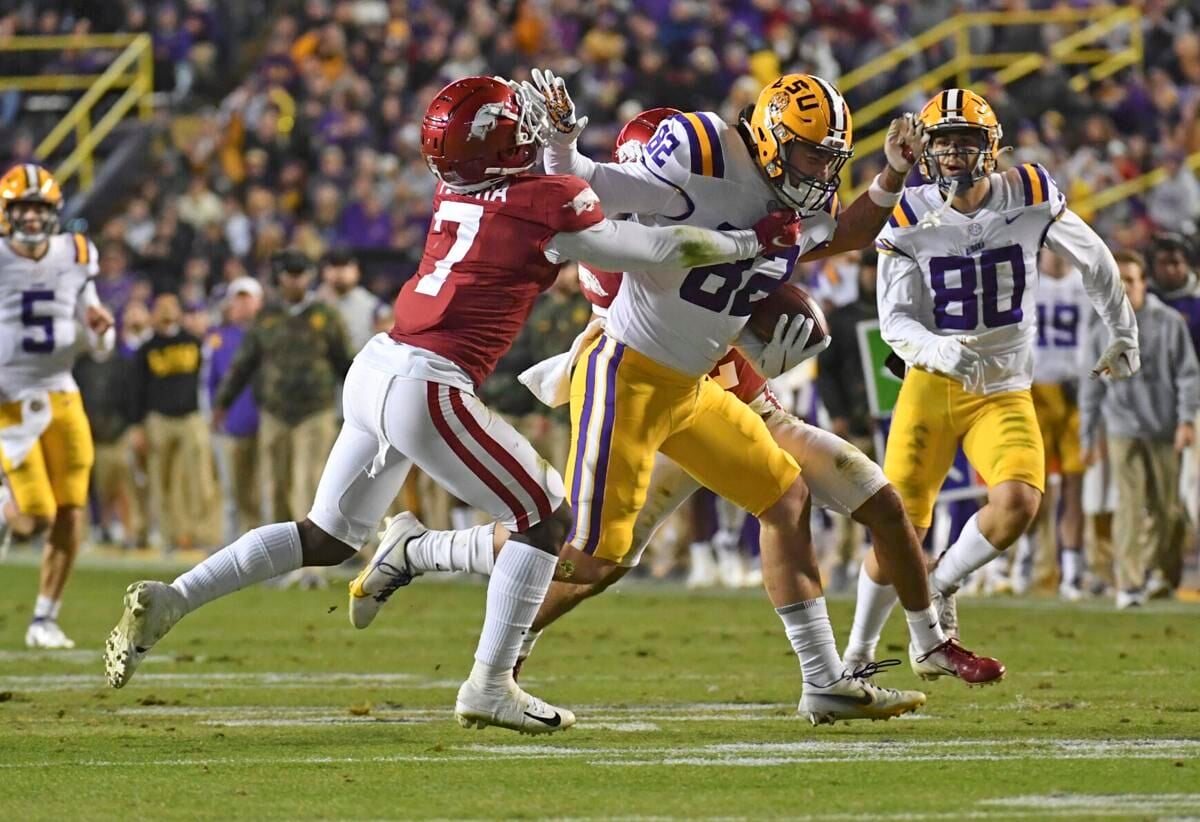 LSU tight end Jack Mashburn (82) pushes back on Arkansas defensive back Joe Foucha (7) on the carry before the fumble in the first half against Arkansas, Saturday, November 13, 2021, at Tiger Stadium on the campus of LSU in Baton Rouge, La. (Photo by Hilary Scheinuk, The Advocate)

LSU tight end Jack Mashburn (82) pushes back on Arkansas defensive back Joe Foucha (7) on the carry before the fumble in the first half against Arkansas, Saturday, November 13, 2021, at Tiger Stadium on the campus of LSU in Baton Rouge, La. (Photo by Hilary Scheinuk, The Advocate)

BATON ROUGE, La. - In the span of an hour Tuesday night, a Southeastern Conference starter and an established Sun Belt player transferred to LSU, strengthening a secondary that had become dangerously thin earlier in the day.

Arkansas safety Joe Foucha and UL cornerback Mekhi Garner both announced they were joining the Tigers in social media posts. Foucha, a New Orleans native, started the past three years at Arkansas. Garner started the majority of the past two seasons for the Ragin’ Cajuns.

The secondary had become an area of major need, primarily at cornerback, after sophomore Dwight McGlothern entered the NCAA transfer portal Tuesday, according to multiple reports. McGlothern, a former four-star recruit, was LSU’s only starting cornerback expected to return next season.

Losing McGlothern increased concerns about the secondary as LSU likely needed to replace four starting cornerbacks. But Garner committed two days after receiving a scholarship offer, giving LSU an experienced corner who can instantly compete for one of the open spots.

Forty-seven minutes later, Foucha announced he was also transferring to LSU. Once a three-star recruit out of McDonogh 35 High School, Foucha started 33 games over the past three years at safety. He made 73 tackles last fall, including 7½ for a loss, with two interceptions, five pass breakups and three quarterback hurries.

Foucha, a senior, has one year of eligibility. He joined a safety room with starters Jay Ward and Major Burns. The Tigers also have former five-star prospect Sage Ryan, former Nicholls State transfer Pig Cage and freshman Derrick Davis. Jr., a top 100 recruit who didn’t play much this season. Ryan and Cage mostly practiced at nickel.

Garner, a 6-foot-2 redshirt junior who started his career at Navarro College, played in every game with eight starts during the 2020 season. Named an All-Sun Belt Conference honorable mention, Garner recorded three interceptions and seven pass breakups. He then led the team with eight pass breakups last season.

“I am very appreciative of everyone at ULL that has helped me during my time there,” Garner wrote. “I will never forget the memories with my teammates there.”

Before Garner joined the team, cornerback had been gutted by departures. All-American Derek Stingley Jr. left for the NFL after an injury ended his junior season, sophomore Eli Ricks transferred to Alabama, senior Darren Evans had exhausted his eligibility, McGlothern reportedly entered the transfer portal and junior Cordale Flott has been expected to turn pro.

Traditionally one of the strongest positions on LSU’s team, redshirt sophomore Raydarious Jones and freshman Damarius McGhee were the only scholarship cornerbacks left on the roster.

McGlothern would have assuaged some of the depth issues by coming back. After stepping in for Stingley three weeks into the season, he established himself as a clear starter.

McGlothern finished the year with a team-high five pass breakups. He also recorded one interception, which he returned for a touchdown. Former coach Ed Orgeron said in October that McGlothern has the chance to eventually become a first-round draft choice. He didn’t travel to the Texas Bowl.

On3Sports first reported that McGlothern had entered the transfer portal, which allowed other schools to contact him. Though rare, players can return to their original team after entering the transfer portal like quarterback Myles Brennan did last month.

LSU began to address the secondary by signing four-star cornerback Laterrance Welch and three-star defensive back Jordan Allen last month. Then it added Garner and Foucha.

Their arrival will help, but LSU still needs more players to fill out the roster. More additions may come through the transfer portal, the same thing that has let players easily leave but also helped LSU inject talent back into the secondary.