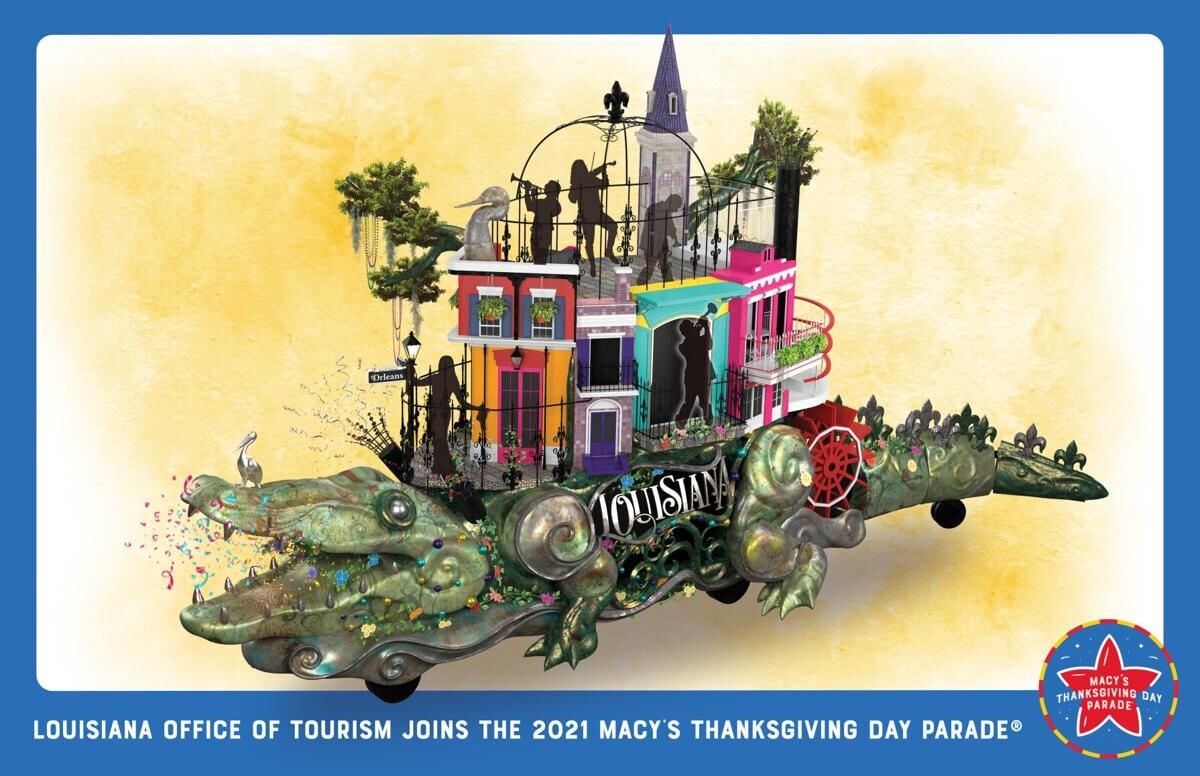 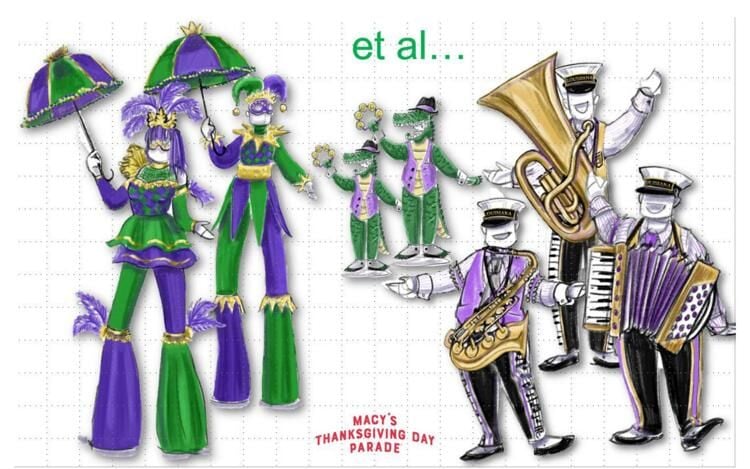 These are the costumes for the Louisiana float in the Macy's Thanksgiving Day Parade. (image via Louisiana Department of Tourism) 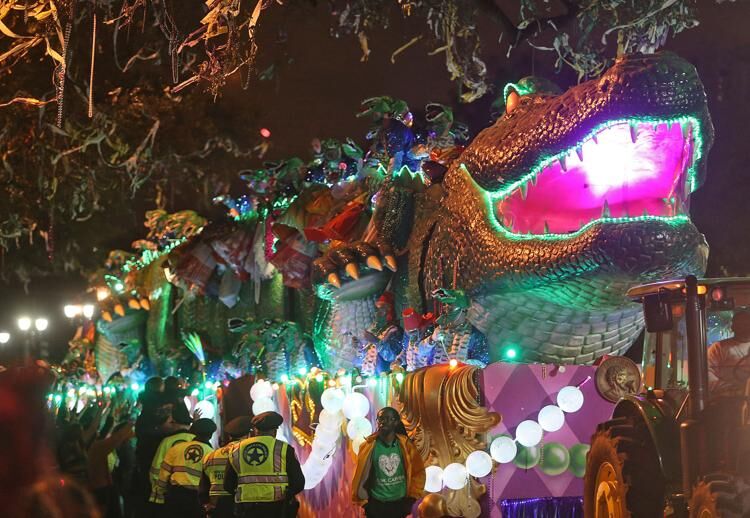 The Bacchagator rolls down Napoleon Avenue as the 1,600 men of Bacchus present their 32-float Mardi Gras parade entitled "Starring Louisiana" on the Uptown route in New Orleans on Sunday, March 3, 2019. (Photo by Michael DeMocker, NOLA.com | The Times-Picayune)

NEW ORLEANS - Louisiana officials are spending $1.375 million to have a giant alligator float in the Macy's Thanksgiving Day Parade for the next three years.

The 60-foot alligator float will roll through the streets of New York City "in an effort to put Louisiana on a national and international stage" and attract more tourists, state officials announced Tuesday.

"When we come out of COVID, we are competing against every state," said Lt. Gov. Billy Nungesser, who oversees Louisiana's tourism efforts.

About 75 million people will be at the parade or watching it on TV or via livestream, he said, making it a "great win for Louisiana."

While Louisiana-based bands and organizations have marched in the parade, this is the first time the state has had an official float.

The team at Macy's designed the "Celebration Gator," and Nungesser said it took a few tries before they got the "wow factor" needed to represent a state known for putting on spectacular parades.

"I think it captured all of Louisiana," he said, as he excitedly talked about seeing the gator crawl down the streets of Manhattan. "I'm real proud of the end result."

The float will be built in New Jersey by Macy's. The cost of the float is included in the agreement, according to Veronica Mosgrove, the director of communications for Nungesser's office.

The gator float will be used in three consecutive parades, starting this November. A multi-year commitment is required by Macy's, she said.

At the very top, there's a stage, where parade floats usually have special guests or musical performers. Officials said they'll announce the name soon of the Louisiana musician who will perform as the special guest.

The buildings in the rendering are bright - orange, pink, yellow, aqua - and have shutters and balconies. There are trees draped in Mardi Gras beads and Spanish moss, along with a street light and an "Orleans" street sign.

There's a smokestack at the back of the buildings and a bright red paddlewheel underneath, giving the impression of a riverboat riding on a gator. Fleur de lis run the length of the gator's tail, and "Louisiana" is written prominently on the sides of the gator.

And of course, there are pelicans. The float appears to have confetti cannons incorporated as well.

The children will be wear baby gator costumes, she said. They will be accompanied by stilt walkers and people dressed as members of a traditional brass band.

Unlike Mardi Gras parades, participants in the Thanksgiving Day parade don't throw anything to spectators.

The goal is to show the riders and walkers some Southern hospitality by serving them Louisiana seafood, Nungesser said, but the details haven't been worked out yet.

Tourism officials also hope to host Louisiana-focused events in New York the week of the parade, but Nungesser said plans haven't been finalized either.

He acknowledged that the parade expense may be hard for some to see, especially after their homes have been devastated by yet another hurricane.

But, he said, the state needs to "juggle that recovery with letting people know we'll be open for business."

How does it compare with the Bacchagator?

The state already has a famous alligator float - the Bacchagator, which was introduced in the 1986 Bacchus parade in New Orleans.

It's 105 feet long and split into three parts. It can accommodate 86 riders, according to the Bacchus website. The riders in previous years have worn big alligator hats during the parade.

Kern Studios in New Orleans made the Bacchagator, which lights up at night and has a moving head.