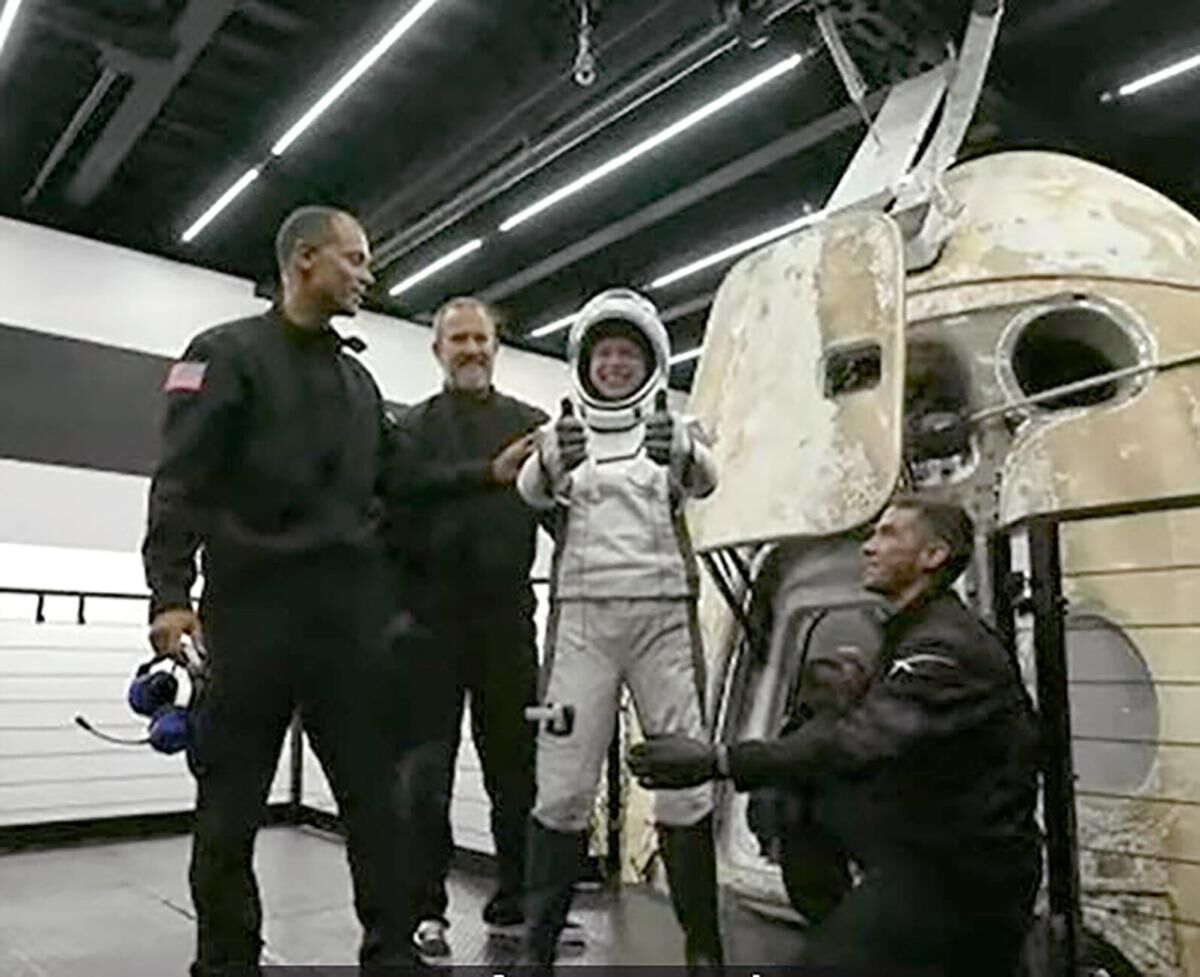 In this image taken from video, Hayley Arceneaux, one of four passengers aboard the SpaceX capsule, reacts after emerging from the capsule Saturday, Sept. 18, 2021, after it was recovered following its splashdown in the Atlantic off the Florida coast. The all-amateur crew was the first to circle the world without a professional astronaut. (Inspiration4 photo via AP) 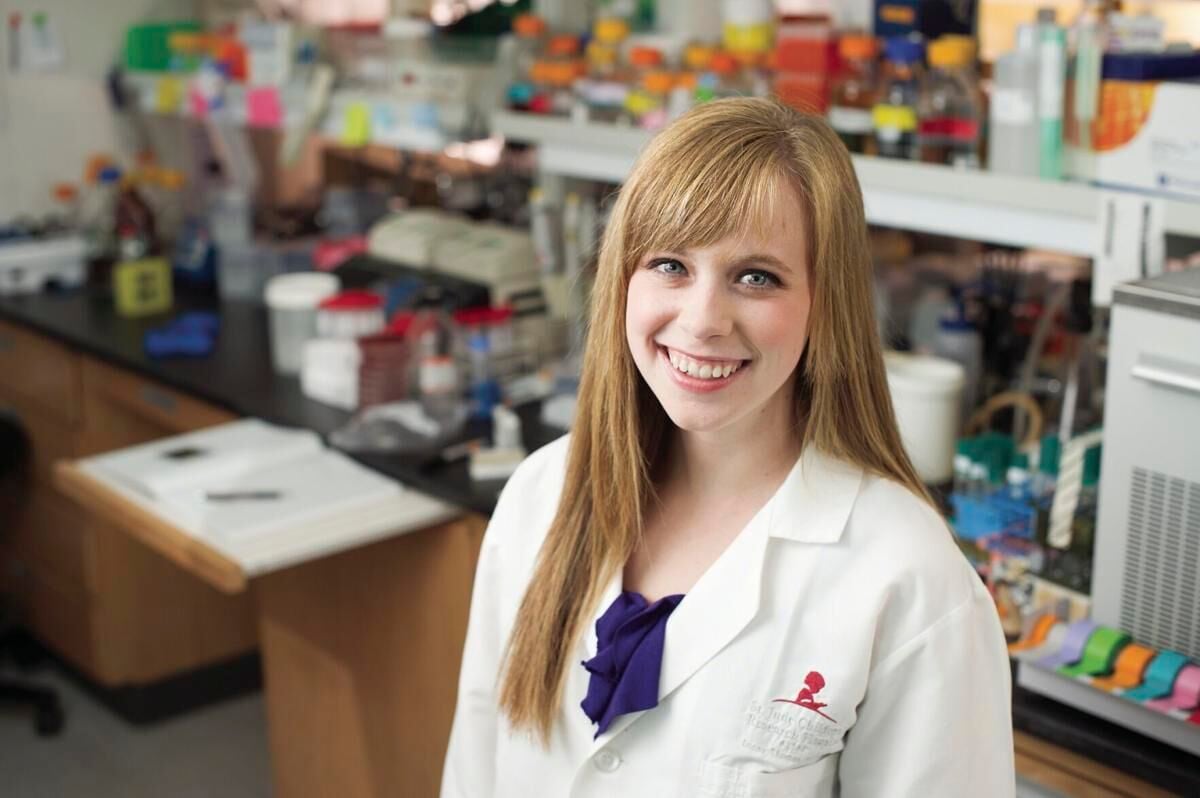 Long an advocate for St. Jude Children's Research Hospital where she was treated and now works, Baton Rouge native Hayley Arceneaux at her office at St. Jude. (Provided photo)

In this image taken provided by SpaceX, a capsule carrying four people parachutes into the Atlantic Ocean off the Florida coast, Saturday, Sept. 18, 2021. The all-amateur crew was the first to circle the world without a professional astronaut.

ST. FRANCISVILLE, La. - It's safe to say many St. Francisville residents were glued to the TV Saturday as a hometown girl made history.

After three days in space, Hayley Arceneaux and the other members of the all-amateur crew of Inspiration4 returned to earth Saturday.

Arceneaux, a Baton Rouge native who grew up in St. Francisville, safely ended the trailblazing trip to orbit with a splashdown in the Atlantic off the Florida coast.

The SpaceX capsule parachuted into the ocean just before sunset, not far from where their chartered flight began three days earlier.

Within a few minutes of splashdown, a pair of SpaceX boats pulled up alongside the bobbing capsule. When the hatch was opened on the recovery ship, Arceneaux was the first one out, flashing a big smile and thumbs up.

The all-amateur crew was the first to circle the world without a professional astronaut.

Arceneaux, 29, a St. Jude physician assistant who was treated at the Memphis, Tennessee, hospital nearly two decades ago for bone cancer, was joined businessman-philanthropist Jared Isaacman, who paid an undisclosed sum to book the flight; geoscientist Sian Proctor; and aerospace industry worker Chris Sembroski on the three-day trip 357 miles above the Earth's surface.

The crew of the Dragon capsule performed several experiments, some of which were Arceneaux's responsibility as the crew's medical officer. The mission aimed to shed light on the impact of spaceflight on the human body.

Environmental and biomedical data and biological samples from all four crew members were collected before, during and after this spaceflight.

Arceneaux spoke with her patients on the second night of the flight. Arceneaux, the youngest American in space and the first with a prosthesis, assured her patients, “I was a little girl going through cancer treatment just like a lot of you, and if I can do this, you can do this.”

The SpaceX Dragon spacecraft didn't allow astronauts to pack for a vacation, but they could bring some personal items. One that Arceneaux planned to bring was one of her late father’s neckties.

Grateful for the medical care that saved Hayley’s life when she was an osteosarcoma patient in 2002 at St. Jude, Howard Arceneaux wore a garish St. Jude tie that, in time-honored fatherly tradition, embarrassed his daughter. Howard Arceneaux died of kidney cancer in 2018.

"I would always say, ‘Don't wear that. It is not the most fashionable,’” Hayley told NBC’s "Today" show on Aug. 18. “But he would insist on wearing it because he said people would ask him about it, and then he could tell them about St. Jude. And so, I'm bringing his tie to space."

Among the things she brought with her was a commemorative gold coin presented to her from the West Feliciana School Board. Matching coins were purchased by the West Feliciana Education Foundation for Arceneaux's mother, Colleen Arceneaux and Brittney Rosenbach, Bains Elementary Principal.

Hayley also brought the book “Goodnight Moon” that she plans to keep for her future children, and a plush toy dog that served as a zero-gravity indicator shortly after liftoff. As the rocket’s second stage engine cut off, she let go of the toy, which was attached to a tether, and it floated in the cabin, letting the crew know they’d reached the microgravity of space.

The toy resembled the golden retriever assistance dogs at St. Jude’s, and the hospital is selling replicas of the toy as a fundraiser.

Arceneaux brought a decal of the shield logo of St. Joseph’s Academy in Baton Rouge, from which she graduated in 2010, and letters from her family to open and read in space.

SpaceX’s fully automated Dragon capsule reached an unusually high altitude of 363 miles after Wednesday night’s liftoff. Surpassing the International Space Station by 100 miles, the passengers savored views of Earth through a big bubble-shaped window added to the top of the capsule.

The four streaked back through the atmosphere early Saturday evening, the first space travelers to end their flight in the Atlantic since Apollo 9 in 1969. SpaceX’s two previous crew splashdowns — carrying astronauts for NASA — were in the Gulf of Mexico.