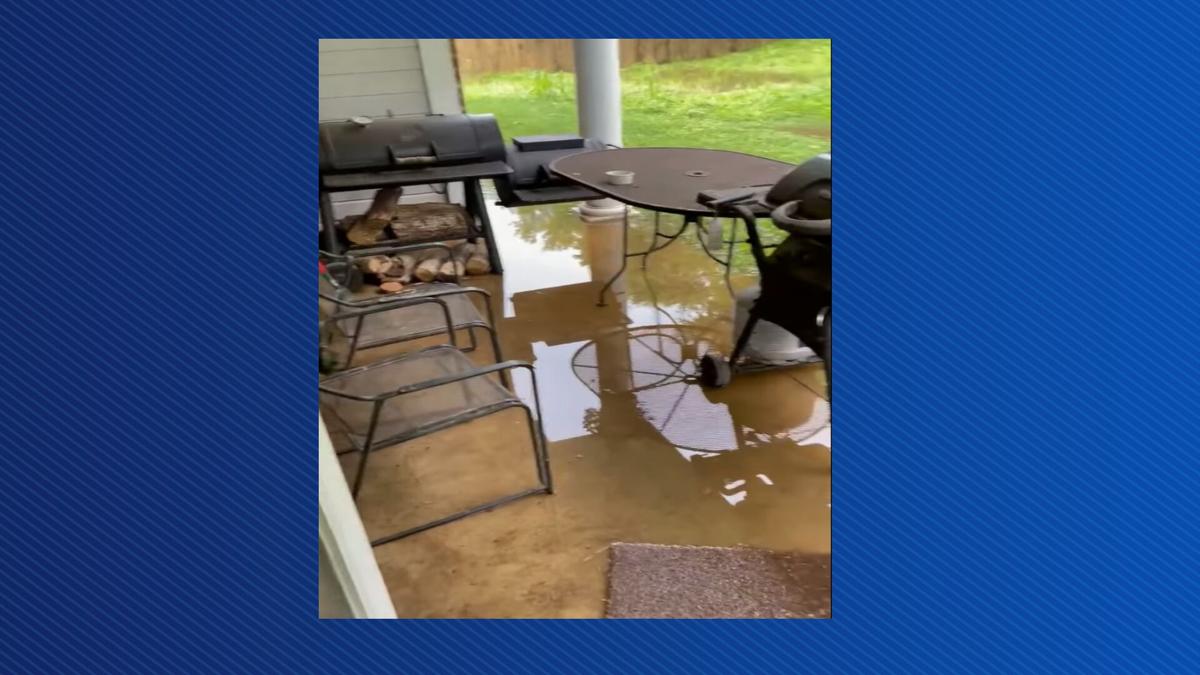 Water reaches the back door of a home in Griffin Estates. 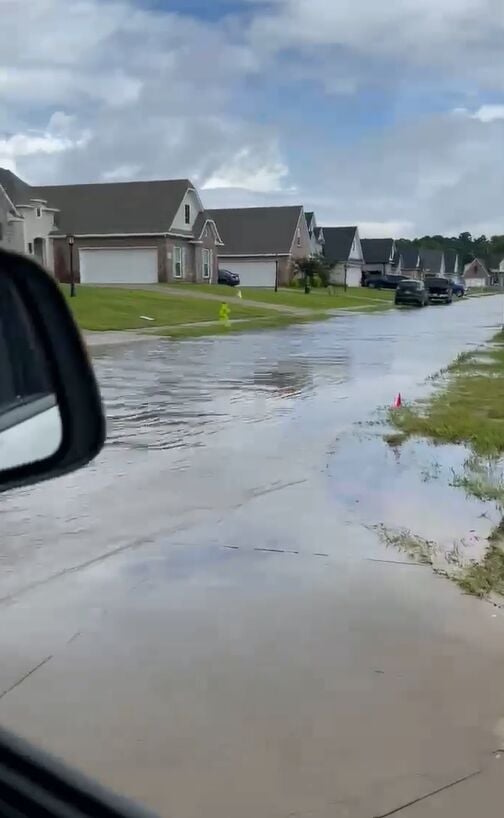 Water flows down a street in Griffin Estates. 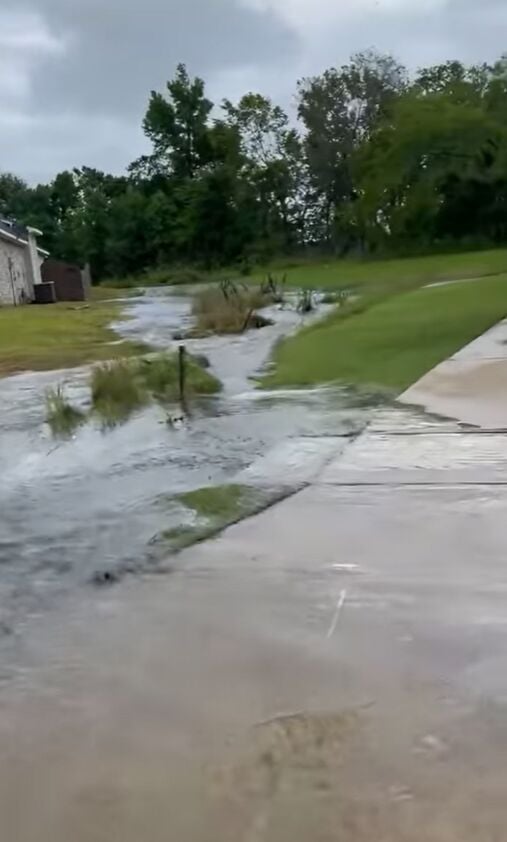 Water flows like a river between homes in Griffin Estates. 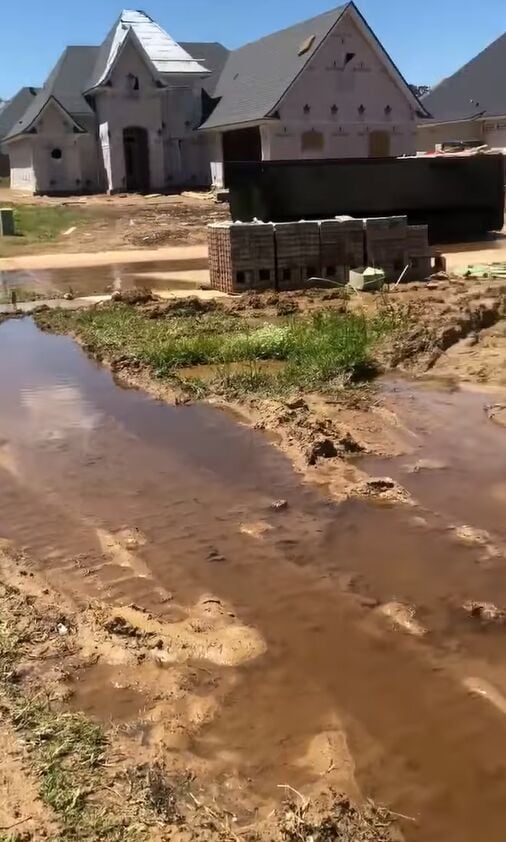 STONEWALL, La. – Most people pay big bucks to have waterfront property. That’s not the case in a developing Stonewall subdivision where streets turn to rivers and back yards to a mushy marsh.

But that’s what some homeowners are dealing with in Griffin Estates Unit 2, especially on the north end of Lessie Drive. Homeowners for months have been taking videos of the torrent of water that flows down the street from what they say is a lack of adequate drainage aggravated by a nearby overflowing pond.

More concerning, though, is the water that saturates their back yards, leaving them virtually unusable. Saturday, when the area was hit with several inches of rain, water covered back patios and inched closer to back doors.

In previous weeks, contractors dug a ditch between two properties, but the outflow was blocked by a sidewalk. A resident said the ditch was put in without the property owners’ permission, creating a muddy mess that held standing water.

Homeowners say their calls to the developer, Jim Davlin, have gone unanswered. At least one family, and possibly more, has hired an attorney. Ten families attended a gathering last month to discuss their concerns.

When contacted by KTBS Jim Davlin, referred questions to his brother, Brian Davlin, who said none of the affected homeowners have contacted him. He is aware of the problems because he said he is on site every day.

Brian Davlin believes there’s nothing that can be done to alleviate the water issues, other than promising to “fix the pond,” which he pointed out is on adjoining property he and his brother do not own.

He also said the homes that are affected on Lessie Drive are “at the bottom of a hill.”

The situation has gotten the attention of at least two state agencies following inquiries by KTBS. One of the issues is not new, however.

The Louisiana Department of Environmental Quality assessed a $3,000 penalty against Jeremy Woodle of Falcon Wood Builders LLC in 2016 for failure to put storm water controls in place. He also didn’t get a permit before moving forward with construction of new houses. DEQ followed up in 2017 and 2018 but the deficiencies were not corrected.

Woodle is listed as one of four officers of Griffin Estates Units 2 & 3, LLC, owned by Jim Davlin. Brian Davlin and Taso Sofitikis of Southfield, Mi., are listed as officers of the corporation, according to state records.

After KTBS asked about the status of the penalty, a DEQ spokesman the department is pursuing legal action. He also encouraged residents to report violations directly to the agency so it can investigate further.

Brian Davlin identified Woodle as “one of the original builders” for Griffin Estates Unit 1. A telephone number listed for Woodle on the DEQ documents is no longer in service.

Some of the residents also complained that the excessive water was to blame for a strong odor coming from the subdivision’s wastewater treatment plant. The day after KTBS inquired about management of the plant, the state Department of Health and Hospitals conducted an on-site inspection and cited plant operator Timothy Bryson with two violations.

The DHH engineers noticed the plant appeared septic. The water was black and had an odor coming from the tank.

Additionally, the aeration basin contents did not appear to “resemble sanitary sewer, but pond water.”

The engineers made several recommendations, said it would make a follow-up visit and gave the developer 30 days to make corrections.

KTBS left a telephone message for Bryson but has not received a response.

Brian Davlin said even though he and his brother don’t own the wastewater treatment plant he is in contact on a weekly basis with DHH. He puts some of the blame on delayed delivery of a motor that was ordered in December.

The problems at Griffin Estates come at a time when even more subdivisions are in the works in north DeSoto Parish – some of which by the same developer. Stonewall and the unincorporated areas on the north end of the parish continue to be a magnet for new families.

Over the past year, the DeSoto Planning Commission has approved or received preliminary information on the following: